Academic & Transfer Counselor at MassBay Community College, Sean Fortney, talks about the “American dream” as the idea that individuals can do whatever they want, work as hard as they want, and get whatever they want. He knows that in much of the world, that's not true and sometimes not true in much of America, however, he believes that community colleges are the places that can make it happen. Sean came from a working class, low-income background and, through his own work ethic and a lot of support, was able to make it through, earn amazing degrees, and have his current job that he loves so much.

Sean thinks our MassBay students are incredible and multifaceted. They work multiple jobs, juggle families, take care of grandparents at home — all while doing well in school. Additionally, they want to make a difference in the world once they finish their degree. His work with these students who care so much for others, makes him care so much. He wants to give them everything he has just to help them reach their goals.

Sean does a lot as an advisor. People think an advisor probably sits down with students and helps them choose their classes and that’s it. But, the large majority of his day is a lot more complex. He not only helps students figure out what courses to choose, but helps them figure out what they’re good at, what things they’re not good at, and what possible opportunities might exist for them in the future. There’s also a logistical piece. Sean spends a lot of time working with students to help them build schedules that work for them and for their home life. Finally, there’s a human piece. Everyone needs a personal connection. His job is to be an arm of the college and is someone who simply checks in with students to see how things are, ask how their classes are going, and how they’re feeling.

Sean’s path to MassBay was winding. His higher education journey began at a community college, but he felt lost as a student. People at the community college cared about him, invested in him, and helped him figure out that he was good at some things, even while he thought he wasn’t. Shortly thereafter, he was able to find his way through scholarships and discovered some amazing opportunities to earn degrees in business, education, and then eventually student affairs administration. He loved residence life and worked in that field at a few different institutions: Duke University, Michigan State University, and College of the Holy Cross. However, he very much missed working with community college students. After his third year at Holy Cross, he was ready for a change, and came directly to MassBay to do what he’s doing now.

Sean loves his job at MassBay and looks forward to waking up and getting to work each day — excited to help students. He thinks he works harder than he ever has before, and he cares more, too. He’s always been that way, but finds himself putting in extra time outside work hours, such as thinking about students at 7:00 or 8:00 at night. He may send a quick email just to check in and see how students are doing. He finds that his life has more joy in it due to helping these students and seeing their successes. Sean sees the incredible opportunities available to them as a result of their hard work. He feels honored to be such a big part of that at MassBay, which makes him incredibly happy. 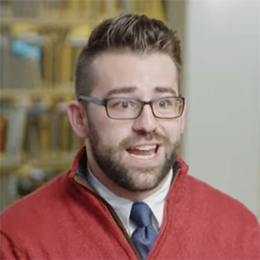