Samuel, after graduating from high school in 2017, went to Brown University in Providence, RI for a year, but it ended up not working out for him. He admits to being a lazy student and failed half of his classes. He knew he had to take some time off to, a) get his life back together and on track, and b) prove to his parents, who were funding his education, he really could succeed at a $35,000-a-year, four-year college, such as Brown.

He has been doing well in all of MassBay classes, and putting in the necessary work. One thing he didn’t do at Brown was reach out to get the academic help he needed. However, at MassBay, Samuel has been using the Academic Achievement Center (AAC), especially, to receive help in some problem areas, such as writing for his English class.

In addition to taking an honors English class and a creative writing course, he has also taken a criminal law course and a criminal psychology course. He plans to go into the criminal investigative world, so these classes will boost his future career.

Samuel has made a very good, close-knit group of friends at MassBay who all plan to stay in contact. He recommends to others to take their time, possibly to attend a community college like MassBay, which is not as costly and feels freer than a four-year college environment. 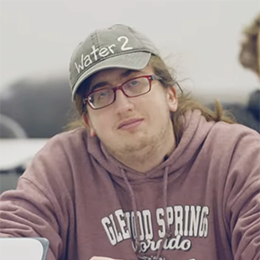