Matthew Mori, a MassBay Community College student and 2020 graduate, started his higher education at a four-year institution, but left school to work out some personal issues. His original plan was to return to the same college, but after enrolling at MassBay and starting classes, he realized he was much happier and chose to stay. Matthew was amazed at how available his professors were to him, and that they were full-time faculty, unlike his four-year college where no full-time faculty taught in his program.

His MassBay professors went out of their way and took the time to help Matthew succeed, which Matthew believes is the main reason he has thrived at MassBay. He initially intended to become a high school teacher so he could help students find their passion. He soon realized that, instead, he wanted to become a counselor so he could offer further support for students to reach their own happiness and success.

As Vice President of the Student Affairs committee for MassBay’s Student Government Association, he feels a sense of family and belonging. He also joined the cross-country team and has run two national championship races. Outside of MassBay, he works part-time in retail. Matthew is busy, but he finds it all rewarding. He’s able to stay involved and strives for success in everything he does. After receiving his associate degree, he will transfer to Framingham State University to study psychology, then plans to further his education with a master’s degree in counseling. MassBay has helped Matthew reinvent himself to become the best he can be. 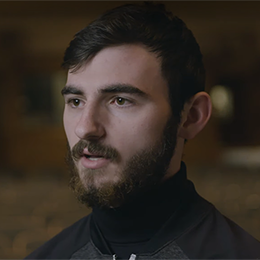