My journey at MassBay was interesting because at first I wasn’t planning to go to college, at least not to a traditional kind of school. I wanted to go to film school because ever since I was three years old, I wanted to be an actor and make movies so I applied to the New York Film Academy.

I showed them some of my work and they really wanted me to go, but it was going to be too expensive, even with financial aid.

I didn’t start school that year, and I wasn’t doing anything else, so I decided to come to MassBay as I heard so many great and amazing things about it. Even my enrollment into the school was unique. I had no way to get to campus for classes, but ironically, Alison McCarty, who is my boss now, really wanted me to come so she actually drove to my house and picked up this random kid that she had never met!

I did photography. I did art. I did all of those kinds of things that interested me because my plan was to be here for one year, but I ended up staying here and I actually got my degree here. I was working as a work-study at the admissions office for about two years or so, and right after I graduated, the position opened up and they gave me a part-time job.

With me helping all of these different people, I hear tales of people whose life situation isn’t good or I hear tales about how they’re scared that they can’t come to the school because they’re undocumented or have no money.

I know the struggles of the whole first generation so I’m able to help people with that. I think that’s why I ended up wanting to stay and work at MassBay, because I can help those people and give them support just as the school has given me, and show them that there’s just something really great about the people and MassBay in general. 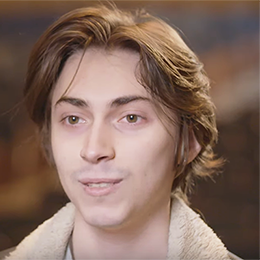