After ten years of working full-time while raising her children, she was at a crossroads and had to think about how either college or a new job would fit in with her children’s schedules.

She ultimately chose to go back to school and enrolled into MassBay. She initially believed she was going to be the oldest one in her classes, but she noticed the diversity of other students’ backgrounds and a mix of different ages.

Because she had been away from school for so long, she struggled at first with finding the time to do her schoolwork at home. It took a while for her to get used to juggling school, family, and home, but after acclimating to her classes and professors, and knowing she could always to ask questions without being embarrassed, she became more comfortable with being a student.

She recently applied for, and was selected as, a One Family Scholar, a program that assists low-income, single parents who have enrolled in a college degree program. She felt good to be among the recipients who, like her, received a scholarship for bettering themselves and setting a positive example for their kids.

Due the strong support she received from one of her MassBay professors who helped her prepare for an interview, she started working in the Financial Aid office on MassBay’s Framingham campus.

Jennifer believes that no matter what your background is, your home situation, level of income, lack of work experience, or not knowing your path in life, MassBay offers many opportunities for everyone. 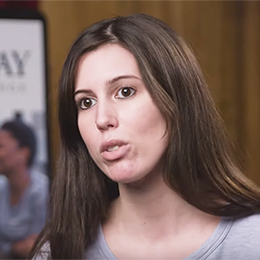