James Hilton, a MassBay Community College alumnus, explains how some students know exactly what they want to do after high school and where they’re going to college, but that wasn’t his experience.

He applied to schools only because it was the thing to do. He left school after about a year and tried to find his way. He worked in different jobs and ended up getting into sales which was a great opportunity for him to realize that he was passionate about business and was excited about the potential of business school.

When he spoke with Babson, where he wanted to transfer, they didn’t have an opportunity for him at the time, as he had done badly while in school. They suggested he enroll at MassBay for more education. When he began at MassBay, he wasn’t sure what to expect, but took the entrance exam and got right into a curriculum and classes that would help get him closer to being accepted at Babson. He attended MassBay for about two years, then successfully transferred to Babson and earned his Bachelor of Science degree in 2012.

James thinks college is an exciting place because it’s a risk-free environment, giving you an opportunity to try different things you haven’t tried before. You may not know where you want to go, or what you want to do, or you may have a clearer sense of it, but either way, you have a place that you can explore and pursue those ideas.

When he was at MassBay, he was on the Student Government Association and was the president. When he left, he was eager to try and remain involved. MassBay was such a fundamental piece and step in his journey. He knew he wanted to stay involved to meet and help other students who were like him, but also because of how amazing this institution is. He just wanted to continue being a part of it.

He thinks that being out in the real world and working, there are some things he misses every day about being part of the MassBay community, seeing people, and working on all kinds of different projects. He’s found that by engaging with the alumni council, he’s able to do things and connect with students. He has spoken on a few panels and does some fundraising events. It’s a way to be involved and give back to a place that was so transformational for him. 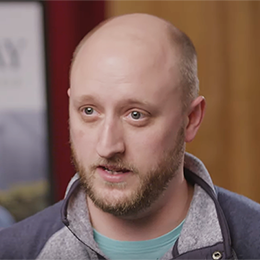