MassBay Community College graduate, Emma Laurie, expected to be in and out of MassBay in two years, just keeping her head down, getting her work done, and then transferring. She didn’t plan to make any connections and only wanted to get A’s and B’s and move on with her life. Her experience, however, was exactly the opposite.

She joined clubs and met amazing people who helped her become who she is today. She chose to be a STEM major, originally, as she thought it was a safe bet, with many STEM jobs available after graduation. While at MassBay, she realized that she didn’t like the STEM path, but did discover her love for psychology, counseling, and helping other people. Without MassBay, she would have just gone through the motions and ended up in a career she didn't like.

Emma had an hour-long commute to campus, which she didn’t mind because she loved MassBay and thought the commute was worth it. She got to see her friends, worked on homework, and went to her classes. When she first started, she would go straight up to her classes then straight back down, but soon she started meeting up with friends and meeting new people. She never thought she’d be able to put herself out there like that, just meeting new people.

She participated in a couple of programs such as the LEAD Program, which is a leadership workshop meeting about five times a semester and presents a leadership certificate at completion. She also was able to participate in the personality and career interest tests, and took some resume-building workshops.

Emma also participated in the Multicultural Mentoring Program, which matches students with a mentor, based on a student’s interests. She said all of her experiences at MassBay helped her in discovering who she was and she would have never thought to do something like that had it not been for MassBay. 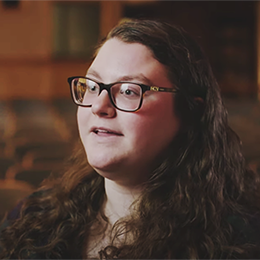