When MassBay Community College student, Ashley Osmecki, started at MassBay, she was 23 years old. At the time, she had made a few attempts at college, so she likes to say that the third time’s the charm. She never thought she was a school person and didn’t think she would ever like a school. She wondered how a person actually likes a school — that concept didn’t make sense to her.

She was working hard in the restaurant and service industries and was thinking about how that was her life, for the rest of her life. Her mom, who also worked hard in the retail business and worked weird schedules, would tell Ashley that she eventually would probably have to miss her kids’ soccer games when she’s older.

Ashley wasn’t certain that would be her life path, but it did occur to her that it wasn’t as fulfilling as she’d like, and she needed more creativity and challenge. She made a few changes in her life and it led her to MassBay. She was apprehensive at first. She thought she wasn’t going to like it, but gave it a go anyway, and ended up loving it.

Her sense of belonging at MassBay is very important to her. She believes it’s truly what moves people, in general, to keep them going. For her, it really did. She admits school is challenging. The drive down to Wellesley every other day is easy, but it’s not easy to really do well in school and get the grades. She said she was never a good student, but is now getting A’s because the other students and people around her are getting A’s and she’s working hard. She thinks that to be part of the MassBay community, she needs to do her own part. Ashley says it feels really great! 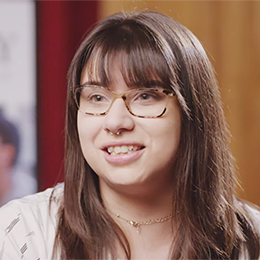