When MassBay Community College alum, Denali Delmar, started her education at MassBay, her name was Judy, but she changed it to Denali at one point along the way, chalking it up to “the 60’s.” She wasn’t in good shape, academically, in high school and a good friend of hers suggested she should go to college, after his having spent some time at MassBay. He brought Denali an application and brought her into the college for her interview.

She began her education at MassBay in September of 1964 and knew it was a stepping-stone to a great future. She came from a difficult background. Her dad never went beyond sixth grade and didn’t think women should be educated, saying, “Oh, it’s a waste of money. It’s a waste of education. You’re just going to get married and have kids.” She did do that, but also completed her education.

Denali describes MassBay as being on a wonderful, big campus now. It used to be located at a former art school in Boston’s Back Bay on St. Botolph Street. The library was on the fourth floor and she remembers climbing up the stairs, as there was no elevator. She finished two years at MassBay before she transferred to Boston University. MassBay got her moving in a positive direction and gave her confidence and a sense of competence.

She went on to start a business and is now retired. She’s happy that she’s now in a place of financial security and is so happy to contribute to MassBay’s scholarship fund, because when she went to MassBay, it was only $100 a semester. Back then, she said, “You can’t afford not to go to school at a $100 a semester.”

Although it’s more expensive now, it’s still a great stepping-stone for people to go from the life that they grew up in to a better world. For Denali and for many others, MassBay was a springboard to a four-year college and a better career and life. 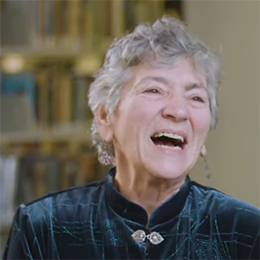