Deborah Georgopoulos is MassBay Community College’s Executive Assistant to the VP/CFO, Office of the VP of Finance & Administration’s Office. Her career path began many years ago, when she was working three waitressing jobs and had two young children.

She met and eventually fell madly in love with one of her restaurant customers. He suggested to Debbie that she should think about continuing her education and consider attending MassBay. She felt it was stretch for her as she wasn’t successful in high school and college terrified her. She made herself walk in the front door of MassBay and from that minute onwards, it seemed like everybody wanted to see her succeed. She received help with financial aid, selecting her courses, and with daycare. She felt that she was destined to be at MassBay. Her favorite course was her business class. The assigned project was to set a goal and complete it. Her personal goal was to buy a house.

It’s worth keeping in mind that she went from working three waitressing jobs to eventual home ownership. She learned and figured out how to work with a budget and looked at different mortgages. She knew she had to have a good job to reach her goal. A few years later, she considers herself a success because of MassBay.

She believes that people “have to care” to work at MassBay. She says that everybody at MassBay cares about the students. 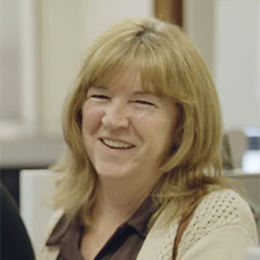