Brian, a MassBay Community College student and expected 2020 graduate, discusses how MassBay helped him get his life on track after leaving high school and working for a few years.

Due to his grades, he wasn’t able to go to college right away, so he worked full-time as a restaurant server, then moved to the Midwest to work as a lab technician.

He soon discovered that the move was a bad personal decision for him and returned to Boston. At that point, he realized school would be his best option and enrolled into General Sciences at MassBay, not knowing exactly what program he wanted to pursue. After taking several different classes, he met a MassBay chemistry professor who worked with him and helped him figure out what he wanted to do with his future. Because Brian loved science and making people smile, he was able to identify nursing as his top choice and now plans on pursuing nursing after graduating from MassBay. He likes that MassBay’s student clubs helped him get involved and connected with other students.

He appreciates that his academic advisor, who is his strongest support, often checks in with him. Brian thinks MassBay is a perfect place for second chances, and with its many opportunities, a college that greatly helps students discover their path. 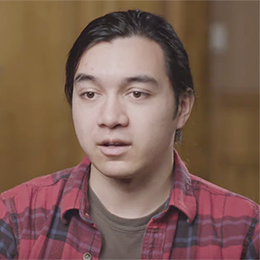